Innovation: An autonomous solar powered IoT sensor, based on Loadsensing

Barcelona, May 2019
The purpose of the REFER Project is to improve the energy alternatives available for buildings, providing different technological options that increase flexibility and ultimately foster the generation of renewable energy and energy efficiency modules. The project studies and tests new technologies in real environments with the aim to make the management of buildings and their energy consumption more efficient in general. Worldsensing participates in the project as technology provider for efficient building management, in particular developing IoT devices powered by solar energy and testing their functionalities in real pilot use cases.
In the field of green energy, solar panels are one of the most commonly used sources worldwide to generate renewable energy. The efficiency of the panels quantifies the ability of the system to harvest clean energy from the sun converting sunlight into electricity. Panels are made up of photovoltaic (PV) cells which gradually accumulate dust and dirt over time; it is therefore crucial to keep them clean. According to environmental studies, dirt accumulation reduces the panels’ performance, significantly decreasing their efficiency.

Real use case to test the dirt monitoring solution

As part of the real use cases within the REFER project, a test has been deployed at a public library located in Montgat (Barcelona) through a monitored installation where three sensors have identified dirt patterns at photovoltaic (PV) panels. The system benefits from a dirt indicator which can be cross-checked with the efficiency levels that the cells are showing. The combination of those two parameters is used to suggest that the PV panel should be cleaned. This means an increase in efficiency because dirt can be removed as soon as it starts reducing the performance of the panels.

The dirt monitoring solution developed by Worldsensing comprises a dirt sensor and a Loadsensing IoT (Internet of Things) node powered by a solar panel. The light captured by the sensor is taken as reference and it is then compared to the light captured using a glass protector that replicates the coating used in PV panels. By calculating the difference in illuminance between them it is possible to identify the dirt accumulated on the PV cell and corresponding maintenance actions can be suggested. 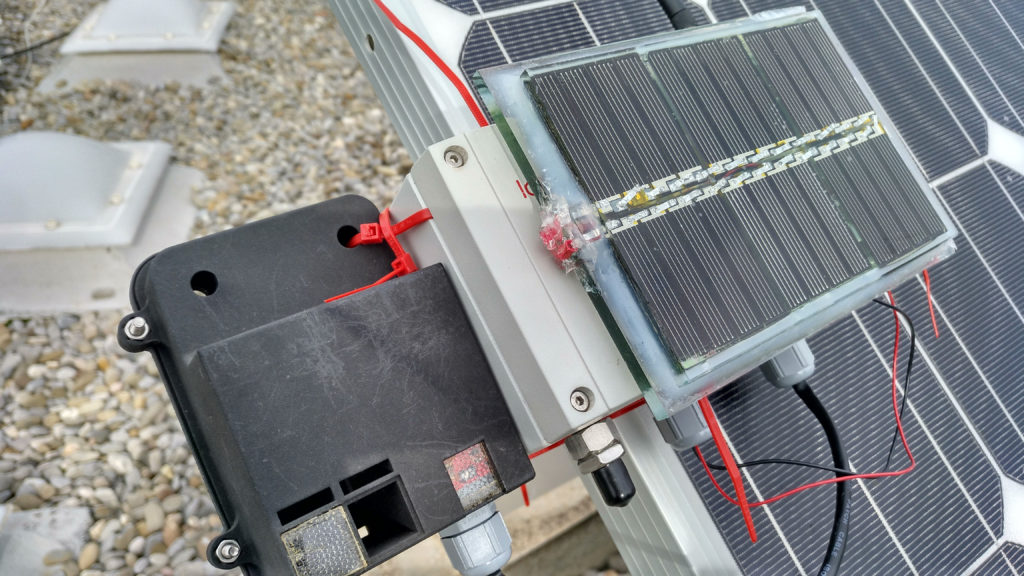 Dirt sensor (left) and photovoltaic cell (right) as deployed in the test use case at the Montgat (Barcelona) public library. The Loadsensing IoT node can be seen in the middle, below the photovoltaic cell.

Monitoring the battery status has demonstrated the long-term availability of the nodes, even when a high data sampling rate is requested (as frequent as 1 per minute). With nodes at normal data sampling rates (from every 15 minutes to every 1 hour) batteries recharged without trouble. This means a very significant improvement in the battery life of the system – batteries now recharge continuously providing unlimited operation of the Loadsensing IoT node.
This solution has been developed as part of the RIS3CAT Energy Community (Comunitat RIS3CAT Energia), an R&D instrument of the Government of Catalonia (Generalitat de Catalunya – ACCIÓ).

About REFER project
The REFER project aims to improve the energy alternatives available for buildings, giving them flexibility with several options to address the generation of renewable energy and energy efficiency modules. The reality of today’s cities is that buildings have various uses and provisions. Some of them are residential and others are industrial and/or commercial building. Energy consumption and, consequently, options to improve energy management are related to the building’s nature and thus are different and must be addressed judiciously. The great challenge of this project is to improve the energy efficiency of existing buildings and new constructions, where it is easier to incorporate new technologies and knowledge. The REFER project focuses on two approaches: on energy efficiency and flexible rehabilitation of residential as well as tertiary buildings.
About Worldsensing
Worldsensing is a widely recognized global IoT pioneer. Founded in 2008, the Barcelona-based technology provider delivers Operational Intelligence to traditional industries and cities. With over 90 employees and offices in Barcelona, London and Los Angeles, Worldsensing is globally active and has already conducted projects in over 60 countries across 6 continents.
Aquest projecte ha estat cofinançat per la Unió Europea a través del Fons Europeu de Desenvolupament Regional (FEDER). RIS3CAT està cofinançats amb el Programa Operatiu FEDER (2014-2020) , destinat a incentivar la realització de projectes d’R+D duts a terme a Catalunya i amb un alt impacte al territori i a les empreses.
Press contact:
Maite Garcia
press@worldsensing.com