Barcelona, March 2019
While former CTO and Worldsensing co-founder, Jordi Llosa, decided to embark on a new adventure to found the IoT solutions start-up Cobugs, Worldsensing’s Head of Engineering, Albert Zaragoza, has taken on the challenge to become the CTO of one of the key companies actively shaping the Industrial Internet of Things. The telecommunications and electrical engineer will continue to lead Worldsensing’s engineering team of more than 30 people while stepping up to create and shape the company’s technology vision and roadmap:

“I’m really excited about taking on the role as Worldsensing’s CTO. It’s a fascinating time to be involved in the Industrial Internet of Things space, with new challenges and opportunities constantly emerging. Given how we work at Worldsensing, always focused on helping our customers solve problems end-to-end, this means having to continually evolve and adjust our technology strategy for both the device and software businesses, including security, data analysis, IT operations, communication protocols, amongst many others. Strategy is key to make sure we deliver the best possible experience to the end-users and partners. I feel very honored to lead Worldsensing’s tech activities, even more so because the company is already a leader in the IIoT space”, Albert states. 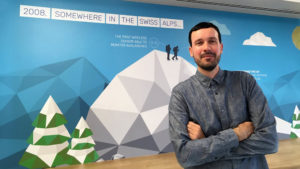 Prior to joining the IoT pioneer in Barcelona in 2017, Albert served as VP of Engineering at EVRYTHNG, an IoT software company. Based at their London office, Albert and the team designed and delivered an award-winning IoT platform used by companies such as Coca-Cola, DIAGEO, GE, Unilever, or LVMH, to name a few.

Challenge to drive the evolution of two lines of business

At Worldsensing, Albert is in charge of further developing both the company’s solution and device businesses. With the software teams, he focuses on continuously extending the core technology the company uses to create custom-built solutions for the Smart Construction and Smart City industries. Applications powered by OneMind, the intelligent IoT solution builder, enable critical infrastructure operators, construction project managers and city operators to act based on a common, single source of truth and make decisions based on real-time data insights.
While the software solutions teams are involved in delivering projects around the globe, Albert is working with the engineers who are part of the device teams to further strengthen the market position of Worldsensing’s wireless monitoring system, Loadsensing. With over 30,000 deployments across 50 countries, Loadsensing is the globally leading system used to monitor risks at critical infrastructures such as tunnel construction projects and mines. Loadsensing is used to digitize existing sensors in harsh and hard-to-access environments. Due to running on the IoT network LoRa, Loadsensing data nodes are able to capture and transmit sensor data to remote control centers over long distances of up to 9 miles / 15 km line of sight helping operators to keep their workforce and public safe and to comply with safety regulations.

“What we do at Worldsensing is challenging and exciting at the same time. The engineering teams are not only delivering both software and device technologies, but are also continuously trying to push further and include innovative approaches in the IIoT space. There is a reason why Loadsensing is setting the standards in wireless monitoring and why we see OneMind generating traction in markets where other IoT platforms haven’t been able to find their feet yet.’, Albert points out. ‘It’s extremely rewarding to be part of this environment, being able to work with and oversee a broad range of cutting-edge tech”, he concludes.

As a company, Worldsensing is committed to developing talent internally and focused on creating an environment where employees can constantly innovate and grow their careers. We wish Albert the best of luck in his new role.
About Albert Zaragoza
With over 15 years’ experience, Albert has helped many companies transform their technology roadmap by combining his deep technical expertise with proven management skills. While currently leading the engineering teams at Worldsensing, he previously served as VP of Engineering at EVRYTHNG, where his team built an award-winning IoT platform used by companies such as Coca-Cola, DIAGEO,and GE. Albert holds a Master of Science in Telecommunications Engineering and a Bachelor of Science in Electrical Engineering.
About OneMind
OneMind is the intelligent IoT solution builder Worldsensing uses to build applications for Smart Construction and Smart City operations. Functioning as a system of systems, OneMind allows connecting all existing data sources to one single point of insight to provide real-time information on operational processes. Applications powered by OneMind provide construction site managers and directors of operations in cities with instant intelligence and response plans to make smart decisions and manage teams and processes more efficiently.
About Worldsensing
Worldsensing is a widely recognized global IoT pioneer. Founded in 2008, the Barcelona-based technology provider delivers Operational Intelligence to traditional industries and cities. With over 90 employees and offices in Barcelona, London and Los Angeles, Worldsensing is globally active and has customers in over 60 countries across all continents.
Press contact:
Maite Garcia
press@worldsensing.com