The European Investment Bank (EIB) will provide a €10 million financing to support the R&D strategy of the Spanish scale-up Worldsensing, a widely recognised Internet of Things (IoT) pioneer that focuses on designing IoT solutions for monitoring sensors and operates in more than 60 countries. The EIB long-term and advantageous financing of Worldsensing will support the company’s innovation efforts aimed at increasing its production capabilities, developing a portfolio of new products and at enhancing the company’s commercial and distribution network.  The agreement was announced today at Web Summit by EIB Vice-President Ricardo Mourinho Félix and Worldsensing CFO David Deprez.

Thanks to the EU bank support, the Barcelona-based scale-up will further develop the Loadsensing product portfolio, a battery-powered, wireless, wide-area data transmission solution, to monitor in near real-time the status of infrastructures, improve efficiency and prevent disasters. The company’s monitoring solution collects sensor data of critical infrastructure, including tailings dams in the mining sector, thus improving the safety of workers that normally collect this data manually and the communities that often live near these sites. Moreover, the EIB backing will enable Worldsensing to not only help preserve monuments in cities and to monitor the status of urban infrastructures, but  will also create safer work environments and address the lack of infrastructure resilience through predicting landslides, floods, infrastructure fatigue and collapse. 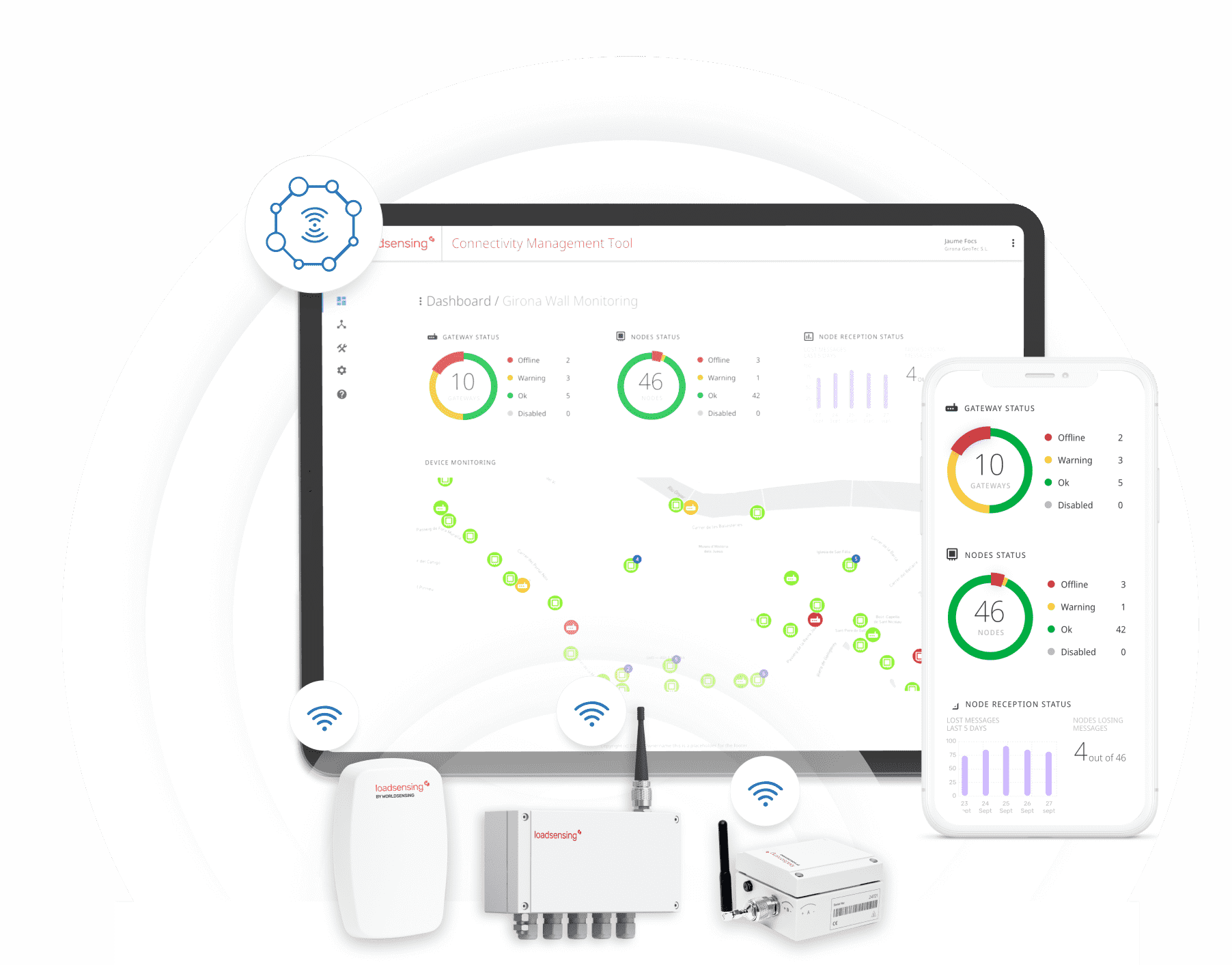 EIB Vice-President Ricardo Mourinho Félix, who is responsible for the Bank’s operations in Spain, highlighted: “Preserving our cultural heritage, creating safer work environments and monitoring the status of our infrastructure are only some of the results that can be achieved using Worldsensing’s technology. This is a very good example of a project whose impact will improve our day-to-day life, wellbeing and security. EIB is pleased to support the company’s RDI strategy to further develop its next generation monitoring solution and wide range of important applications. Boosting this type of cutting-edge technologies is critical for the competitiveness of the European economy, not only to face the COVID-19 crisis but also to address Europe’s long-term challenges. The Web Summit is the ideal place to announce these ground-breaking projects.”

Commissioner for the Economy, Paolo Gentiloni, said: “This agreement between the EIB and Spanish start-up Worldsensing, supported by the Investment Plan for Europe, shows how technology can be put at the service of society. Thanks to the new financing, Worldsensing will develop a solution to monitor remotely the status of critical infrastructure like bridges and railways: helping to prevent disasters and save lives.”

David Deprez, Chief Financial Officer at Worldsensing, said: “The EIB investment will enable us to accelerate our solution development. As a market leader in the space, we see safeguarding critical infrastructures as a mission that Worldsensing is uniquely positioned to deliver on,” said Deprez. “At this point in our growth, the EIB funding will help us to expand our global footprint and continue driving infrastructure resilience and safety through our partner network.”

Some recent examples of projects where Worldsensing’s technology has been applied include new infrastructure projects like the expansion of the Paris metropolitan underground system, the metro tunnel construction monitoring of the U5 metro line extension in Frankfurt (Germany), and monitoring water wells across one of the largest open pit mines in the world (Chile).

The EIB is financing this RDI project through a venture debt operation backed by the European Growth Finance Facility (EGFF) – a programme loan under Investment Plan for Europe. It is a financing instrument used by the EU bank that supports leading companies in innovative sectors. Since it was launched in 2016, this initiative has granted over €2 billion in financing for projects in areas such as robotics, artificial intelligence and biomedicine. The project will help create 50 new highly skilled R&D jobs in Worldsensing’s headquarter, located in Barcelona (Spain).

The European Investment Bank (EIB) is the long-term lending institution of the European Union owned by its Member States. It makes long-term finance available for sound investment in order to contribute towards EU policy objectives.

The EIB’s venture debt product is a financing instrument that supports startup and fast-growing innovative companies in cutting-edge technology sectors. It combines the advantages of a long-term loan with a remuneration model based on the company’s performance. Venture debt transactions help strengthen the borrower’s economic capital without diluting the shares of existing investors. The product, developed four years ago in response to market needs, is backed by the European Fund for Strategic Investments (EFSI), the financial pillar of the Investment Plan for Europe.

The European Fund for Strategic Investments (EFSI) is the main pillar of the Investment Plan for Europe. It provides first-loss guarantees enabling the EIB to invest in more and often riskier projects. The projects and agreements approved for financing under the EFSI have mobilised €535.4 billion in investment so far.

Worldsensing is a global IoT pioneer. Founded in 2008, the industrial monitoring expert works with over 270 engineering partners in more than 60 countries to provide safety through critical infrastructure monitoring in mining, construction, rail and structural health. The company is a member of the EIT RawMaterials, initiated and funded by the EIT (European Institute of Innovation and Technology), a body of the European Union, and has recently joined the European Raw Materials Alliance.  Worldsensing has more than 80 employees and offices in Barcelona, London, Los Angeles and Singapore and investors include Cisco Systems, Mitsui & Co, McRock Capital and ETF Partners, among others.

Web Summit is an annual technology conference with more than 70 000 attendees held in Lisbon, Portugal. It is considered one of the largest and most important tech events in the world.

Worldsensing is a global IoT pioneer. Founded in 2008, the civil infrastructure monitoring expert serves engineering customers in more than 60 countries, with a network of global partners to jointly drive safety in mining, construction, rail and structural health.

Worldsensing has more than 90 employees and offices in Barcelona, London, Los Angeles, Singapore and Poland. Investors include Cisco Systems, Mitsui & Co, McRock Capital and ETF Partners, among others.